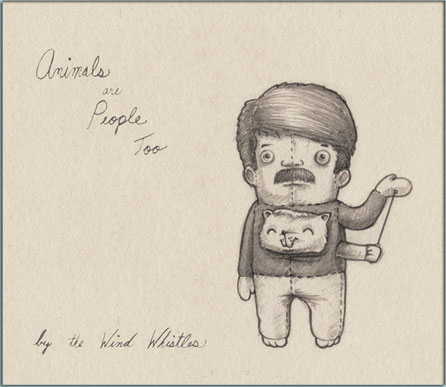 The Wind Whistles – Animals Are People Too (Aaahh Records)

Another release here from those prolific purveyors of Indie Folk, Aaahh Records who, as well as being home to the habitually excellent Julia Kotowski (also known as Entertainment for the Braindead) play host to Canadian strummers ‘The Wind Whistles’. Who, for those not in the know, have been reviewed on this here blog once before in a relatively polite and likeable way.

The Wind Whistles (Liza and Tom) are devout creators of a genre that I’m going to invent a name for myself, because I can, and that name is going to be ‘Soup Indie’, which will most certainly catch on in the mainstream press so consider yourselves in on the ground floor and start using it far and wide. Soup Indie is that special sub-branch of Indie Folk which eschews darkness, politics and growling, 20-a-day vocals in favour of being generally nice, usually upbeat and in rare moments of misery, offering you a nice bowl of soup and a hug. So basically the Yin to Tom Waits, Bob Dylan and Johnny Cash’s Yang, which reads rather more suggestively than I first thought but still I reckon it’s a good genre description which a fair few bands could fit into and as habitual as my disdain for Indie in general is I’m starting to get the feeling that this is the best brand of the style there is.

With ‘Animals Are People Too’ TWW have largely set out a stall of continuing along the path of Soup Indie that they were treading last time I heard them. No bad thing in itself and the gentle energy of it makes for an incredibly inoffensive listen, which is more of a compliment than it may seem, as well as jumping up to a moment of head nodding catchiness every now and then.

Admittedly at times the instrumental side can become a little monotonous, making some tracks sound almost as if they don’t change from beginning to end but I reckon that’s the curse of working in this style, once you manage to catch the listener up in comfortable, happy feel of the album it’s all too easy to just stick to what you were doing without leaving safe ground. But there are moments of semi-genius in there, ‘Turtle’ being the most obvious one with it’s temptingly toe tappable sound. And vocally? Well, it’s Soup Indie y’know, both halves of the duo have voices which positively drip with niceness, there’s no particular quality to the singing beyond that but it’s not an unpleasant personality for a voice to have. How well that would work if a deeper, more emotive sort of style were attempted I don’t know but as TWW don’t seem inclined to try to find out I suppose it doesn’t much matter.

Anyway, ‘Animals Are People Too’ is worth a speculative download and listen, it’s got its moments that’ll stand up to second and third sittings plus, at the very least, it’ll allow you to boast that you’ve got your very own Soup Indie collection going on. Casual music obsessives revel in talking about obscure bands, real obsessives talk about obscure genres.