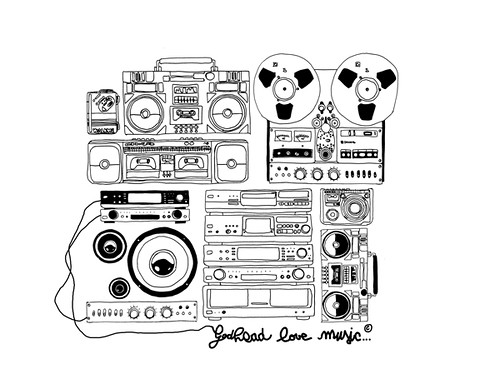 During the process of digging through and re-posting all the reviews I did have backed up from Beat Lizard I’ve become acutely aware of the big gapping holes left by the ones I’ve lost. An unknown number of reviews, articles and features are unhappily now lost to the dark forests of electronic oblivion where I can only hope their spirits (for all lost writing has a soul – as any fool knows) have deftly avoided the shortbread house and instead found peace in a palace full of 72 virgin maids granted by the Almighty in deference to the good work they did in spreading the holy word of good music. And as is ever the way those of us left behind must keep up the good work with ever renewed vigor so, tears choked back and heart turned to ice, I’m going to give a brief fumbling seeing to to those albums I have loved enough to write about but which have been lost to the written archives of The Laikanist…

Oh how I gushed on first listening, then later on second listening and then a couple of days ago when I heard Titus 12’s latest effort ‘Bardman Business’. Best free Dub album to date? Probably, although there are a fair few close seconds (Arie – Cold Up Norf is a lot cleaner but still deserving of love) and up there with the best Dub there is, although Dig and Delve takes a darker and more winding path that it’s possible peers. Catchiness, darkness and good old fashion beats are mixed up in equal measure here and they all sound damn fine.

Not even sure if I did ever review this, but I should have, Catalan Ska extraordinaire, guaranteed to have you skanking like a tit be it on the bus or in the privacy of your own bedroom. Didn’t like 2.0 oddly enough but there you go.

I made a few digs when I first reviewed it and I maintain that it’s a faulted effort, not for Mr Loop’s beats of course, but for the occasional just plain wrong rhyming of the Kojak Brothers (who I’m fairly certain could do good with a thought out full album). But ‘Hunger Pains’ is an excellently heavy sounding yet smartly observed and knowingly amusing track which gives the whole affair a longevity I never really expected from it.

Cracking stuff from Holly Saucy, intelligent, honest, considered lyrics with good production beneath. Holly deserves far more attention than she apparently gets and stands tall against the competition. One of those rare individual voices amongst the ranks of Hip Hop imitators.

I love ‘Gone’, Ghost Poet’s testament to the mundane realities of getting life wrong and I like the rest too. I’d recommend anything from Ghost Poet and there are full albums to move on to but this is as fine a starting point as you could hope for before descending into poetically pragmatic lyrical observations which show why Hip Hop is the genuine spiritual successor to whatever genre you previously thought spoke on the lives we actually do live, as opposed to the ones we’re encouraged to fantasize about.

Victoriana/Steam Punk Rap which you’ve got to admit is a cracking starting point for a concept album. Not what you’d call an overly cerebral album but fun, well made and perfectly formed for the imagery it’s playing to. And let’s face it, who doesn’t want more tea, pith helmets and mechanically enhanced apes in their lives? Idiots, that’s who.

You can tell this UK Hip Hop release is a first attempt from small town boys Godmanwho but with an ear for sampling and nice lyrical flows it’s a none too shabby debut. What happened to Godmanwho I’ve no idea, as far as I know this was their only release on the Black Lantern Music netlabel and I’ve half given up on the notion of a followup, which is a shame but this half hidden gem is still worth grabbing. Smart, honest, occasionally acerbic and occasionally arrogant, ‘SSP’ remains a favorite on my portable sound system.